I love memorials.  Most of them.  A good memorial lets you think, ponder, remember.  The great memorials offer the sense of scale or envelop you in the complexities or remind you of the cost, not in dollars but in people.  They’re there to remember the subject, not merely to glorify.   If a memorial does little more than remind you of the person who was there and the people who were involved, then it has done its basic job.  When a memorial makes you contemplate the struggle and the sacrifice, then it has truly achieved its purpose.

Some of these below achieve their purpose.  Some do their basic job.  Some simply seem to glorify.  (Click on the links for more.)

There’s no way to get a sense of the entirety of the Saturn V at the Kennedy Space Center.  You can take the tour to launch pad 39, which gives you a sense of size but from a distance.  You enter the space at the bottom of the Saturn V to a view of the impressively large F1 rockets.  A walk about three football field lengths takes you to the capsule, which seems so small in comparison.  It’s virtually impossible to grok the entirety of the thing.  Walk along and get a sense of the pieces.

The Kennedy Space Center:  The Atlantis

The Kennedy Center knows how to put on a show.  And they know how to memorialize a space shuttle.  There are two films and an astounding reveal.  The thing itself is a marvel, set open as if delivering a satellite in space.  A mock up of the Hubble Telescope  hangs nearby along with a film detailing the relationship between the Atlantis and its many servicing missions to the Hubble.  The whole experience is awe inspiring.

The Vietnam War Memorial can be overwhelming.  This list of names of those who gave their lives in this divisive war are carved into polished gabbro, an igneous rock similar to basalt, reminding one of the scale of the loss.  Its mirror-like surface almost puts you into the memorial and sets you adrift in this sea of the deceased.  It’s a powerful reminder of the cost of war at the personal level.

This memorial, which has also been the site of many memorable occasions such as Martin Luther King’s I Have a Dream speech, among others, is a classically endowed shrine to the man who saved the union.  It’s large but simple.  The man, himself, dominates the center of the memorial.  You climb the steps of this Grecian inspired temple to view the statue of Lincoln sitting serenely in his giant throne, his work done, his time to relax.  To his left and right are two of his most famous speeches, the Gettysburg Address and his Second Inaugural Address.  It’s one of those places you can sit and contemplate the scale of his accomplishments as well as the history that followed.  Looking out over the great Mall, you can see the reflecting pond, the Washington monument, even the Capitol in the distance.  You’ll also be standing there not merely in the shadow of the giant behind you but in the footsteps of those who followed.  It is an awe-inspiring temple.

My father was a Korean War veteran, having enlisted as the war raged on.  However, the war came to its uneasy finish before he could get out of boot camp.  My father used to complain that it was the forgotten war with few memorials or any great remembrances.  I think he would have been pleased with the war memorial in Washington.  Sadly, he passed away shortly before it was dedicated and open to the public.

The memorial itself is in three parts: the stainless steel statues of the soldiers, representing the soldiers who fought; the reflecting wall, where there are carved representations of those who supported the war effort from all areas of society; and the reflecting pond, where the numbers of killed, wounded, missing or imprisoned are tallied.

It was on a cool, clear, March day when I finally made it to the National D-Day Memorial in Bedford, VA.  I had passed by the signs countless times, but it was always there out in the middle of nowhere (sorry, Roanoke).  That’s the extent of my criticism.  It’s just so far away from everything.

On the other hand, The D-Day Memorial truly gives you a sense of the scale of the operation, even in the way it’s designed, from the smallish memorials to the commanders at one end through wide open area memorializing Operation Neptune (the code for the crossing of the channel) to the Operation Overlord arch, the destination of all those people, and finally to the narrow strip that represented the actual passing of the troops into France.  It culminates in one particularly haunting image, that of a statue memorializing victory at the end of the First World War which had been pierced by a shell.

Now, I happened to be there in March when there were few visitors, so the water features were turned off (also, partly because of the season), so what pictures I took are missing the water and are generally unencumbered with other visitors, which is a shame because this is an impressive memorial that more people ought to visit.  It has a sense of symbolism and scale that the WWII Memorial in DC lacks.

This memorial to the Shoah is simple and powerful.  Six glass towers, each representing a different extermination camp, reach into the air and are inscribed with one million sets of numbers on each tower.  At the base of each tower, steam rises, giving the impression of smoke billowing.  There are quotations from witnesses carved into the walkway and inside each of the towers.  It’s an impressive, immersive experience worth any visit to Boston.

The Other Lincoln Memorial

The Emancipation, or Freedmen’s Memorial was often referred to as the Lincoln Memorial from the time of its dedication in 1876 until the dedication of the memorial we are now very fond of.  For its first 100 years, this memorial faced the US Capitol.  It was turned around to face the Mary Bethune McLeod Memorial, which was placed in the same park in 1976.

Frederick Douglas spoke at the Freedmen’s Memorial dedication.  He didn’t say much about it, only offering that it was a “highly interesting object” and little more about the statue.  He spoke, at length, about his relationship with Lincoln and Lincoln’s evolution as president.  It’s worthwhile to give it a read: (Oration in Memory of Abraham Lincoln).

As you can see, it’s a problematic representation.  It probably ought to be removed and ensconced in some museum with explanatory cards and a copy of Douglass’s speech at the ready.  It ought to be replaced with a better statue, perhaps even one more like the vision of Lincoln on a pillar surrounded by Union soldiers, all African American.  He might rise above them, or he may stand as equals.  Or add a statue of Frederick Douglass looking on with a mixture of disdain for the “interesting object” and admiration for the man it is meant to honor.  It’s difficult to say exactly what to do.  The Freedmen paid for it, but apparently had little say in what it would look like.  I suspect they might have enjoyed the original idea better than what is actually here.

Or, we can accept the judgment of Frederick Douglass on that day:

“Fellow-citizens, I end, as I began, with congratulations. We have done a good work for our race today. In doing honor to the memory of our friend and liberator, we have been doing highest honors to ourselves and those who come after us; we have been fastening ourselves to a name and fame imperishable and immortal; we have also been defending ourselves from a blighting scandal. When now it shall be said that the colored man is soulless, that he has no appreciation of benefits or benefactors; when the foul reproach of ingratitude is hurled at us, and it is attempted to scourge us beyond the range of human brotherhood, we may calmly point to the monument we have this day erected to the memory of Abraham Lincoln.”

The National Air and Space Museum is more of a collection than simply memorial.  Although when you think about it, a museum’s primary job is to remember.  The National Air and Space museums have so much stuff that it takes two centers – one on the mall, and this one in Virginia – to display what they have.  The centerpiece of the museum is the Space Shuttle Discovery, pictured below.  It’s a bit of a clutter.  It generally seems to be organized with objects of similar eras grouped together, or in the case of Discovery, items across time based on a theme (in this case, space exploration).  It’s a fascinating place that I’m going to head back to this summer. 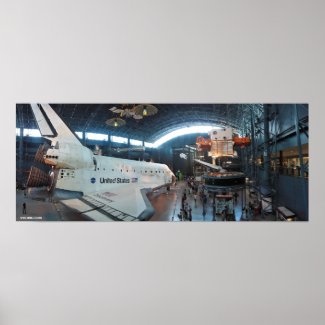 The Shuttle Discovery Poster
by AdmiralElks

So, where do we begin with Monticello.  It’s a beautiful house in a beautiful location, beautifully maintained and is a monument to the man who wrote the Declaration of Independence.  There are ugly parts, but you can visit them.  They’re just out of the way or sight of the main house.  Jefferson mostly kept the enslaved he owned out of sight.  They worked in a kitchen in the basement; they slept just down the hill; they worked mostly elsewhere when they weren’t working on the house itself.  Jefferson, like most of his chattel, was born into his peculiar lifestyle.  A man of wealthy tastes, he claimed to despise the institution which built his house, fed and cleaned his family, etc.  However, he kept re-designing, re-building, and buying so much that he could never really follow his conscience and be done with it.

Current management discusses the matter.  The “Slave House Tour” begins with a lengthy lecture on the history of slavery and does its best to put Jefferson in a context where it seems okay.  It’s a normalization of something that even Jefferson thought to be “a hideous blot.”  But his feelings were complicated as ours must be as we approach this memorial to a man who did so much to make this country happen.  A more honest approach to the problem might be found at Montpelier, James Madison’s house.

Thirty miles away from the Thomas Jefferson memorial known as Monticello is James Madison’s memorial – the preserved remains of Montpelier.  Born into a family burdened with the Peculiar Institution, as Jefferson was, Madison was also torn.  He couldn’t really afford to emancipate his possessions, not given the considerable part of his fortune that they represented, nor the manpower they gave in aid of propping up his lifestyle.  His wife, Dolley, certainly had no misgivings about their “property.”  The managers of the estate, however, have taken a different path from those who manage Monticello:  They’ve embraced the history of the house in all it’s complications and contradictions.

There is a perfectly marvelous exhibit on slavery and the effects on the enslaved in the basement, or working area, of the house.  The living quarters of the enslaved are being rebuilt, roughly located where the originals were just off to one side and the rear of the main house.  Unlike Monticello, where the greater part of Jefferson’s embarrassment were kept as invisible as possible, Monticello’s enslaved were visible to all who visited.

The estate managers have also actively invited ancestors of the enslaved to be a part of the story of the house and its environs, to take part in the interpretation of what happened there.  The current memorial to the author of the Constitution makes no attempt to make any of that invisible.  If anything, it has been highlighted and attention has been brought to bear.

I am an award-winning photographer who happens to be blind in one eye. View all posts by admiralelk

One thought on “Memorials”