The owls pictured below are ambassador animals, having been rescued by Sunrise Wildlife Rehabilitation in High Springs, Florida.

The Great Horned Owl is Einstein, who had failed to thrive and was rescued by a professor who helped him learn how to stand and eat.  He can’t hunt or forage, so he can’t be released back in the wild, the preference for all the animals rescued by Sunrise.  Happily, he makes a wonderful ambassador and helps educate the public throughout North Florida about the beauty and the plight of owls.

Ruby (pictured below) is an Eastern Screech Owl who was hit by a car and rescued.  Unfortunately, she suffered some brain damage that affected her eyesight.  Specifically, she can no longer see at night, which is a particularly difficult problem for a nocturnal hunter.  Happily for us, however, she makes a wonderful animal ambassador and helps educate the public about these adorable creatures.

The mysterious Merlyn (formerly known as Merlin), pictured below is a Barred Owl who was thought for nine years to be a male who had imprinted on people.  Attempts at releasing her failed as she kept finding new people to approach.  Ultimately, she was taken in, and despite being somewhat feisty, has joined the ranks of ambassador birds at Sunrise.  She also recently began laying eggs, something she hadn’t done in the previous nine years, which resulted in a name change.

You can help Sunrise Wildlife Rehabilitation by going to their website and donating. 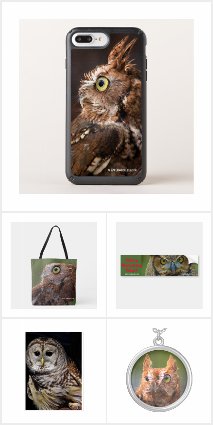 If there’s something you don’t see in the store that you want to get on a postcard, poster, mug, or whatever, drop me a line and I’ll see what I can do!

I am an award-winning photographer who happens to be blind in one eye. View all posts by admiralelk

One thought on “Owls”